Learn About the Alternative A Frame and it's Founder, Robert Pilgrim

47 Years of Operating Cranes Results in the Alternative A Frame

Robert Pilgrim has operated cranes all his working life, starting at the age of 17 for general contractors pouring concrete, erecting steel and setting all types of equipment. In 1980, he struck out on his own, leasing a 27.5 ton truck crane. He soon upgraded by purchasing a 30 ton truck crane to expand his market and ability to take on bigger and more profitable jobs.

To counter the ups and downs of the construction market and economic instability of the late 1990’s Robert decided to focus his energy on the HVAC market. “I had lifted a lot of AC equipment over the years, was familiar with everything involved in those jobs and realized that HVAC was a fairly stable market with year-round opportunities,” he stated. “I purchased a new 22 ton Pioneer boom truck with a 360 degree working radius and a 20’ wood bed – ideally suited for my new market.”

Always looking for ways to more efficiently perform his jobs and help his customers, Robert built a 2 wheeled buggy to roll AC units weighing up to 3,500 lbs. around on rooftops. “HVAC Contractors face special challenges and added expenses when trying to place rooftop units in places that are too far for boom trucks to reach,” Robert claims. “The solution used to be hiring larger, more expensive cranes and even helicopters to complete the jobs. The buggy system worked well but obviously had limitations. I needed a better alternative.” 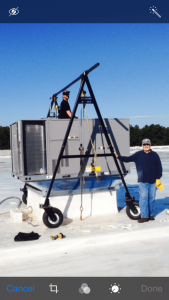 In November of 2011 Robert used the Alternative A Frame for the first time. The job required removing a 2500 lb. AC unit up 25’ and over 250’ and replacing it with a new 2500 lb. AC unit and curb adapter. “The Alternative A Frame worked as designed,” according to Robert. “My customer was very pleased with the job and we both were able to put more money in our pockets. I charged extra for my services using my 22 ton boom truck & the A Frame and my customer still saved money since he did not have to rent a larger crane do the job.”

The second job where the Alternative A Frame was used required replacing a 3000 lb. York AC unit up 30’ and over 225’. The job went as planned. The third job, at a mall, required replacing a 2500 lb. Carrier unit up 30’ and over 650’ with a curb adapter on a 30 degree angle roof curb. The mall manager did not want the mechanical contractor to use a helicopter because of the cost and evacuation of that part of the mall. This job was Robert’s longest roll and the Alternative A Frame performed without any difficulties.

Robert has since been awarded U.S. Utility Patent 9,592,998 for the Alternative A Frame and has contracted with a manufacturer to produce the units. Over a dozen more jobs have been completed using the system, with customers praising how well the units work. A trailer and rigging package are available as accessories. Most commercial HVAC and Ventilation companies, crane truck operators, commercial roofing businesses and even school systems will find the Alternative A Frame a useful tool to have available.

“Every HVAC contractor that has seen the Alternative A Frame in operation has gotten excited about the profitability and efficiency that it provides,” Robert concluded. “With an affordable small boom truck and the A Frame, they can do big crane and even helicopter work.”

For more information, contact Robert Pilgrim by sending him an email or calling 404-538-4274.